Okay, enough of that nonsense.

Bin Lee is an award & festival winning writer and director hailing from Los Angeles. After working in software development for years, he jumped into the entertainment game in 2010. Since then, he's dabbled in numerous media, including: feature film, shorts, reality TV, and webseries. He's donned many hats, including: editor, assistant editor, 2nd assistant director, PA, producer, writer, and director. 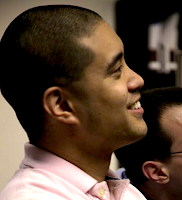 (I have no idea why I went 3rd person in the previous paragraphs.)

Software QA by day, writer/director/creator by night. I geek out over the art of story-telling, sports analytics, and "normal" nerdy stuff.